I open my eyes, but the darkness is so thick I can’t even see my nose. I can feel though – I feel something hard and cold on my left; I can feel that my legs are tied together; I can feel my jaws clamped shut. By something sticky. I try to open them, and the stickiness loosens, my tongue is free and I feel a searing pain run through my head and back – there is blood in my mouth. So much blood that it starts dripping into my left eye…
I realise I am lying down. Pushing against something hard in front of me, I manage to shift into an upright position, my back legs still tied together and useless. I start to notice other things now, and even though I can’t see anything I look down to my front paws. Something is wrong. I move the right one, then the left: they are numb. I bring them to my mouth and smell: more blood. And something is missing. Something is missing. Something… 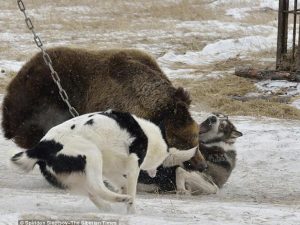 Even though I can feel how empty I am, I throw up warm watery stomach juices when I understand that my claws are missing, my teeth are missing and, judging by the pain, maybe a piece of my ear, too. Panicked, a low groan escapes my mouth and I try, in vain, to get up. Something is holding me down – it could be a rope or a wall or a person – it could be anything, because I can’t see and I can only feel pain, pain all over, and I want to get out, I am surrounded but I need to get away, I need to get away…

I can see and smell and hear and feel as I am being dragged, hind legs first, out from a building over cement and then grass and finally sand, that billows around my face and sticks to my blood as I try to stop the dragging by holding on to nothing with my clawless paws.

I see the people jogging beside me, with sticks and with ropes and with dogs barking, barking furiously. At me. I see the trees roll by, and when we stop my legs are tugged one last time. All is still. I need to get away.

They are still laughing and speaking and yelling and barking at me. One dog is close, but tied to a human and he cannot touch me. I don’t move. Maybe they will leave. Maybe they will get away first. I don’t move, but suddenly there is a bang and a pain in my head from where I can’t see, so I turn and the noise becomes louder. There are boots next to my head, and they move and kick me on my ear. I raise my head – there is cheering. I move my head again, slowly, and feel resistance – something is around my neck. I feel the kick again, this time under, on my stomach. I groan, and even the groaning hurts. Automatically I tuck my hind legs under my body and discover that they are not tied, they are free! I need to get away, so I try to get up. I am free! The boots move away, I am free! I ignore the noise, so much noise, as I manage to put my four legs under me and push – I’m up! I am free! I will run through the circle of humans and away, away from all of this. I am free!

But I am not. Because I try to get away but my head stays back – the rope around my neck pulls into my flesh and I can barely breathe as I move away from the humans who are surrounding me. I cannot leave. I cannot get away.

Then, the humans move back. They make more space. And from the middle of the crowd, as I watch momentarily stunned, come four humans with dogs, and they are looking at me. I pull away, backwards: I can see the rope attached to my neck now, pulling against me, sawing into my ears and skull but no, no, I cannot get away.

They come close and I only see the dogs. They are growling and barking and jumping and pulling towards me, pulling at their metal-studded collars that shine in the bright daylight. One is wagging in all the excitement and look! They are just cubs! They won’t hurt me, will they? Just puppies. Surely they won’t hurt me. But why are they growling and barking? We’ll just play now, right? After all, I’m just a cub, too.” 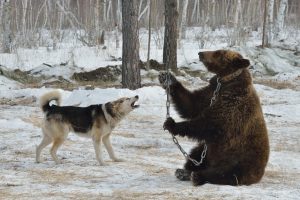 The horrific practice of bear baiting was common in the UK until 1835, when it was banned and tagged as animal cruelty. In some countries, however, it is still widely practiced. One of these countries is Russia.

Not only bears, the majestic symbol of Russia, are used. As you can see in the attached photos, foxes, raccoons and badgers are all poached from the wild and rendered defenceless by removing their canines and claws. They are starved to near death so as to be too weak to hurt the dogs that are set upon them. Sometimes bear baiting is practiced to train the dogs for hunting; other times it is pure entertainment, like bullfighting in Spain. As recently as 2013, Royal Canin (http://poisonedpets.com/royal-canin-agrees-to-help-bears-abused-in-bear-baiting-events-it-sponsored/) admitted to sponsoring bear bating events after undercover volunteers had filmed the whole competition.

The owner of the best dogs – those that manage to corner the bear, attack it most savagely or corral it where the hunter wishes – win trophies and probably money, too.

If the animal being used – be it bear, fox or badger – doesn’t die immediately, it is kept in inhumane conditions to participate in event after event after event. Imprisoned in cages so small the animal can’t even turn around and never cleaned, they develop diseases and sores from the abuse. Some bears have survived so long, they even have names and a certain fame among hunters and participants. Tortured and starved, this practice is beyond animal cruelty. It is so despicable that just writing about it has brought tears to my eyes, as I know it has to yours, too. 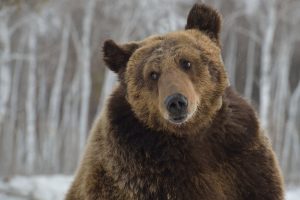 11-year old Masha worked in a traveling circus most of her life, and when she started becoming old and cranky she was sold to a bear baiting business who kept her for years, locked in a concrete cage too small to stand up in and freed only to be used as bait for hunting dogs. She is one of the relatively lucky ones: having been rescued in 2013, she is now trying hard to recover from her physical and psychological wounds. When she hears barking, she starts shivering and she is known to sit in a corner of her new enclosure for hours on end.

The bear in this articles was photographed earlier this year by Spiridon Sleptstov (you can find more photos here: http://sachaja.livejournal.com/594835.html). Oddly enough, she is also called Masha and is, unfortunately, still in the torturous grip of this despicable business. Her captors describe her as being intelligent and having “fun” during the fights, which is questionable to say the least.

Luckily, you can help.

With one click, you can share this story so as to spread the word. Many think that bear baiting is a thing of the past but tragically, it is not. The more people know, the more chances we have that we will be listened to in our campaign against it.

Forgotten Animals is working hard to raise awareness and petition against animal cruelty in Russia, and for this we need to find volunteers, print leaflets and pay a lawyer to write and lobby a legislation banning animal abuse such as this.

Any donation will play a fundamental part in helping animals such as these!

Whatever you decide to do, it will be a huge help, so thank you, thank and thank you again from the Forgotten Animals!