Concerned citizen Elena Bobrova was recording a video of a small container with the beluga from a ferris wheel. The video depicts unique footage of various stages of construction of a so called travelling dolphinarium, during which two beluga whales were held in the container barely exceeding the size of their own body for several days. The animals were virtually immobilized. All that the animals could do in such a condition was to breathe and wiggle their tail a bit. The disgusting smell near the container indicates that the animals have been in the water contaminated with faeces for a while.

Elena: “I had to make the footage from a ferris wheel. I asked a woman in a caravan closed to the ticket office if I can buy tickets? She answered positively and proposed me to choose the seats. Then I said that I am not interested in the tickets at this very moment and asked her when the animals have been brought to the main enclosure? She said that no the animals haven’t been brought yet. I asked: “When will they arrive?” Her tone changed: “For what purpose do you ask all this? The animals will be brought at night!” I asked: “Is it tonight?” She replied: “When they will be brought we cannot tell you.” At this point I left.”

However, recording during the next few days showed that the situation did not change. Now the hopes are pinned on the city prosecutor’s office and the specialized agencies, who said they would carry out a comprehensive audit of the dolphinarium. UK based, Forgotten Animals (formerly known as Big Hearts Foundation), hopes the investigation and public outrage will prevent the shows from happening. 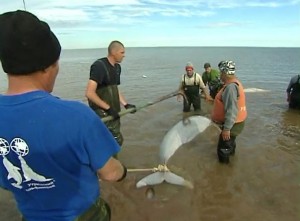 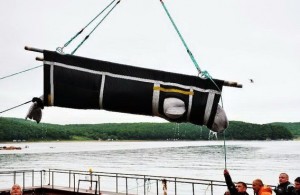 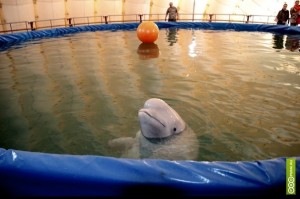 According to the calculations of animal activists since the tour in Belgorod this same Dolphinarium has visited more then eight cities (Vladimir, Orel, Tver, Kaluga, Tula, Penza, Pskov, Veliky Novgorod) before arriving to Perm. During relocation belugas are kept for weeks in a similar travelling “tub”. Anna Kogan, founder of Forgotten Animals says : “The dolphinaria just get an injunction / fine in one city and move on to the next.”

Forgotten Animals has proposed a law change, which is currently being considered in the Russian State Duma. The law would require the premises where marine mammals and circus animals are kept to adhere to their natural habitat / requirements, this would make it impossible for travelling Dolphinariums to exist and would, if approved, shut down most stationary ones. Currently Russia does not have guidelines or legislation specifying transport / keep of marine mammals. Currently, in Russia there are around 40 dolphinariums, 12 of which are ‘travelling’.

By supporting us you allow us to lobby legislation banning travelling dolphinariums and circuses.