Vanessa-Mae condemns the horrible dog cruelty case in Russia, where the family pet was frozen to death by the unpunished owner. 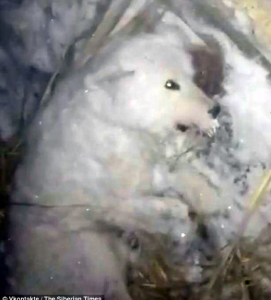 While in other countries it’s becoming illegal to keep pets outside in the harsh temperature, in Yakutsk – the world’s coldest city, with the current temperature of about -32°C (-26,6°F) the owner not only left his dog outside, but poured cold water over the animal and left it to die in agony.

Animal welfare activists’ attempts to rescue the animal failed, they found the animal alive, but encased in ice in its kennel, the dog was rushed to the vet, where it had to be euthanized to end its agony.

The case is now being investigated by the authorities, but it’s unlikely the cruel owner will be held accountable, as the current animal protection law in the country makes it nearly impossible to seek justice.

This is not the first time animal cruelty in Russia makes the world headlines, everyone remembers the recent case of shocking animal abuse and mutilation that took place in Khabarovsk, Far East of Russia, where the teen girls responsible were ONLY given prison sentences because they committed crimes against people as well.

For the atrocious animal cruelty they committed to many animals they got 150 hours of community service. 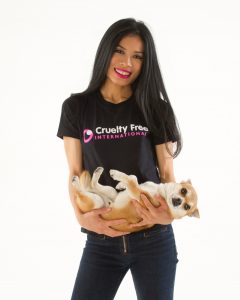 Vanessa Mae: “I am deeply saddened and outraged to witness continuous cases of animal abuse in Russia and the total lack of progress on legislation from the Russian Government. I love Russia and I’m urging the president Vladimir Putin and the Government to work together with experts on creating and enforcing the effective Animal Cruelty Law.”

Forgotten Animals charity  has been lobbying the legislative change for a more severe and effective animal protection law in Russia for many years now. But instead of taking into consideration suggestions of the experts based on the international best practice, the Government keeps “throwing bones” to gullible public by promising to toughen the law.

Currently the state Duma is voting on the amendments to toughen the punishment for the article 245 of the Russian Penal Code – Animal Cruelty, but, in reality, the proposed amendments will not bring any change to animals, as it will still be impossible to prosecute cruelty.

The owner of the dog in this case would not be punished under these proposed changes.

Forgotten Animals legal expert comment: International legal standards and practices allow to actually punish animal abusers and protect animals taking into consideration the act of cruelty itself. The current Russian law (and its proposed amendments) only allow to prosecute the motivation behind the cruelty. The article can only be applied, when it can be proved, that the animal abuser had sadistic or mercenary motives, or the abuse took place in the presence of minors. Proving these is always practically impossible,

That is why the Animal Protection law in Russia simply doesn’t work and animals continue to suffer.

Until the Federal Government, instead of pretending to work on the law just to keep the public quiet invites animal welfare experts to participate in developing an effective and adequate legislation proposal, that will actually work, like in other developed countries, until the way the country treats its animals is brought up to the international standards, animals in Russia will continue to suffer horribly, while the abusers will be entitled to induce pain and suffering to those who have no voice to speak for themselves, as they please, free and unpunished.