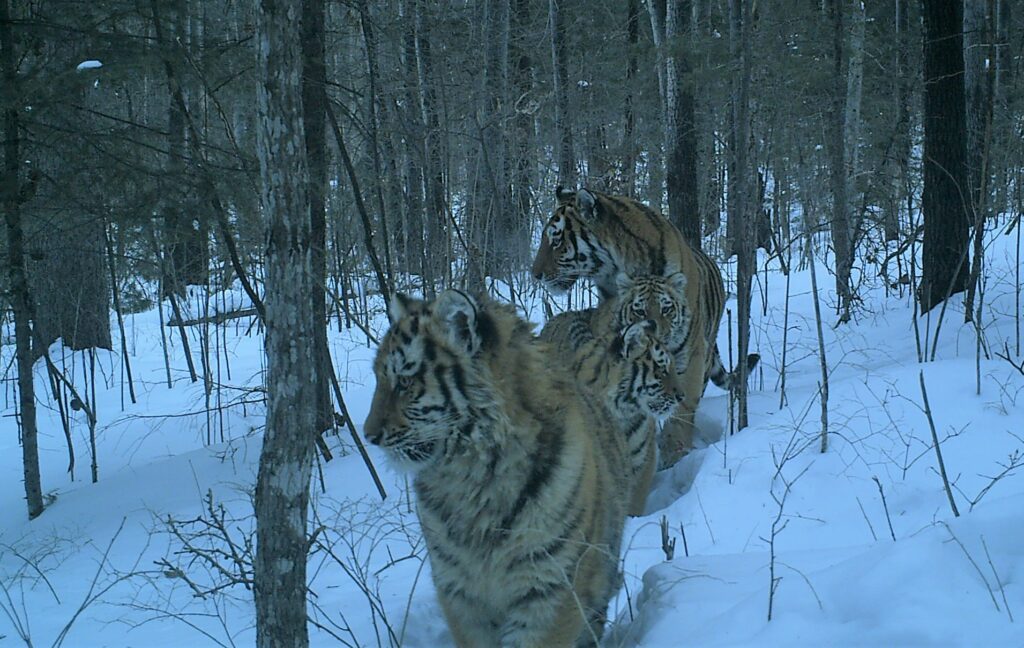 Along with Bear, Amur Tiger is considered Russia’s symbol and a point of national pride. This means protecting this rapidly disappearing subspecies must be the highest priority, right?

Sadly, as we have uncovered, it’s not.

Through our work on wildlife rehabilitation and conservation at Utyos and the deep involvement in a variety of other animal welfare – related work in Russia, we kept coming across various issues concerning the Tiger habitat and the lack of proper management thereof: poor health of the population of wild tigers is an alarming sign of a much broader biodiversity problem regarding the struggle of many other wild species who constitute the tiger’s natural food chain.

Investigation and cooperation with the government

We started asking ourselves questions and going into a deep research dive on such issues as:

We performed a detailed investigation, with the help of over 20 individuals, encompassing everything from logging impact, corrupt local officials, tiger parts trade network, swiping of African swine flu breakout in national parks under the rug and hiding of forest fire catastrophes to alternative view on how tiger population should be counted. Our shocking, but sadly not too surprising, findings of the investigation have been passed on to the federal government, who has luckily been proactive on setting up groundwork for a sustainable solution to these problems.

Read the illuminating results of the 2 year undercover work of the Environmental Crime scientist Allison Skidmore, who risked her life spending time amongst tiger poachers in Russia.

The work to figure out the details of what the problems are, without any bias or special interests, is time-intensive and runs on practically unpaid volunteers and scientists doing it in their free time. We have a long road ahead working with the involved parties to make tiger protection and conservation efforts more efficient and effective. We will keep doing it, resources permitted.

We look forward to constructively cooperating with the federal government in addressing and solving these issues, before it is too late and another iconic wild subspecies is wiped off the face of the planet.

In winter of 2021-22 we have sent a group of scientists to independently assess the realistic number of tigers remaining in the wild in an area of 800 -1000 square kilometers. We have purchased trap cameras that are being relocated based on an established schedule. DNA samples are being collected and markings and sightings recorded. The state of the tiger main food sources is being assessed. The results of this work will be published in scientific papers and hopefully will bring more clarity on the real state of affairs and the urgency with which the government must act.

According to scientists, if the population drops below 150 adults, the inbreeding level will be irreversible and will inevitably lead to the end of the subspecies.

The latest officially published estimates show 550-600 tigers left in the wild. Our scientist estimate it to be around 300… We will see what the results of our count will uncover.

Supplemental feeding of ungulates within the tiger habitat

In 2021, the wild Amur tiger population was further hit and suffered severely due to the 90% of the wild boar being wiped out by the African Swine Flu outburst. The deer becomes the tiger’s only prey and it’s vital to help them survive through the long cold months. The current extremely cold winter in the area  (-40° C) and the huge amount of snow make it very hard for ungulates to survive the long winter. Supplemental feedings are a proven way to ease the situation and are being performed by the team of UTYOS as we speak, in the hopes of reducing the deaths. This does not only help conservation of animals, but also alleviates the human-tiger conflict by reducing the chance of wild tigers entering nearby villages in the search of food.

Since 2012, we have been supporting the work of UTYOS wildlife Rehabilitation, located in heart of the Amur tiger natural habitat – Sikhote-Alin Nature Reserve in the Russian Far East. The centre has been the life’s work of the Kruglov family since 1991, established by the tiger expert Vladimir Kruglov, and continued by his son and daughter Eduard and Lyudmila, to protect the unique biodiversity and threatened wildlife species in the region. We are working on enlarging the capacity of Utyos in order for them to be able to take in, rehabilitate and release more emancipated wild tigers in need.

Besides their rehabilitation and conservation efforts, UTYOS serves as a permanent sanctuary for one very special tiger named Zhorik, who was injured by humans so severely, he nearly died, was left permanently disfigured and would never be able to survive in the wild on his own.

At UTYOS Zhorik has the best conditions, a huge forest enclosure, freedom from unwanted human contact and the 24/7 care and safety he’ll need for the rest of his life.