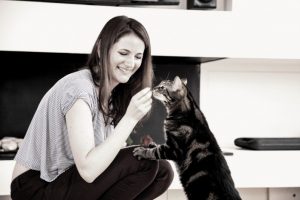 Unlike in the main cities Moscow and Saint Petersburg, animal welfare community there was virtually nonexistent.

After getting a full picture of the scale of animal abuse, stray problem and lack of private or public organisations actually doing something about it, Anna and her partners committed to raising animal welfare standards in former Soviet countries.

Instead of merely fighting the consequenсes, our approach targets the root causes and uses the best expertise and knowledge from around the world along with our deep understanding of local culture and mentality to fight the problems efficiently and effectively.

Forgotten Animals is an officially registered charity in UK, Russia  and, since December 2019 – the US. With only 2 paid employees and dozens of volunteers spread around the world we carry out or directly support projects in nearly hundred cities across different countries, and counting.

Over the years we managed to extend our reach to help wild, captive and farm animals.

Forgotten Animals closely collaborates with a number of animal welfare organisations around the world in order to bring positive change, one animal at a time.

I believe we can achieve major shifts in behaviour and attitude towards animals. We are doing it where the most difference in animal welfare can and needs to be made.