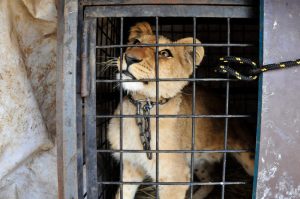 THE “LAW ON RESPONSIBLE TREATMENT OF ANIMALS” –BYLAWS ON WILD ANIMALS  – WHERE ARE WE AT?

Despite the fact that 180 days have been granted since the adoption of the Federal Law for the development of these documents, many of them have either not been adopted at all, are still in a draft stage or do not find the support of the public (especially of animal welfare organizations).

One of the important issues is handling Red Data Book animals. Today, if such animal is found sick or injured you have only 3 days to inform the territorial governing body of “Rosprirodnadzor” – the Federal Service for Supervision of Natural Resources of Russian Federation, about taking an animal and then transfer it to oan fficial facilitiy (zoo, shelter or wildlife rehabilitation centre), who then must request the permit from Rosprirodnadzor to keep it. Otherwise the facility faces punishment.

Another problem that needs to be resolved is treating seized wild animals. There are no facilities available for keeping such animals (no state shelters), while the flow of animals after the ban on petting zoos is expected to be enormous.

Animals kept in circuses, zoos, dolphinariums and aquariums will be supervised by Rosselkhoznadzor starting from January 1, 2020. According to the decree, the Rosselkhoznadzor (the Federal Service for Veterinary and Phytosanitary Surveillance) will license activities for the maintenance and use of animals in zoos, circuses, zootheaters, dolphinariums and aquariums starting from 2020. It will also monitor compliance with the requirements for the maintenance and use of animals for cultural and entertainment purposes. In cases where wild animals are kept or used in captivity, but not for cultural and entertainment purposes, the state control will be carried out by Rosprirodnadzor.

The list of animals banned from private ownership has been finalized and includes various types of snakes, crocodiles, turtles, cetaceans and many mammals, including, but not limited to bears, big cats (tigers, lions, leopards, jaguars and snow leopards), other wild cats such as cheetah, cougar, serval, clouded leopard and lynx, foxes and wolves, primates and birds.

The list of wild animals, which will be completely forbidden to keep by the residents of the country, will have to be approved by the Russian government, as it was the case with dangerous dog breeds. An exception will be the use of such animals in zoos, circuses, dolphinariums and oceanariums, as well as, as service animals.

At the same time, the law legalizes centers where animals are kept in a semi-free, or artificially recreated habitat, implying their further release into the wild.

GOVERNMENT APPROVES THE USE OF DOMESTIC ANIMALS IN ENTERTAINMENT

The Russian government has approved the list of cases in which the use of domestic animals in entrepreneurial activity is allowed.

According to the list, domestic animals are allowed to be bred and sold for business purposes. In addition, it is permitted to use such animals for entrepreneurial activities in the field of culture, sports, leisure, entertainment, and for rehabilitation and social services (with the exception of medical rehabilitation services).

New rules for keeping animals in zoos, circuses and dolphinariums

Almost three months after the adoption of the law, the Ministry of Culture developed requirements for keeping animals in zoos, circuses and dolphinariums. The new rules will enter into force on January 1, 2020.

The requirements for the zoos to comply with

The space where the animal is kept should be “of adequate size in accordance with the needs of specific species and taking into account the three-dimensional parameters of the enclosure.” Moreover, the design should “satisfy the physical and behavioral needs of animals and meet the goals of controlling their behavior.” However, specific enclosure dimentions are not indicated.

The physical contact of zoo visitors with wild animals is prohibited.

Whereas, any contact with agricultural and domestic animals, can only occur under the supervision of zoo employees. Uncontrolled feeding of animals by zoo visitors is also prohibited.

Requirements for circuses and zootheaters

“Each animal kept in a cage should be provided with a minimum floor area exceeding at least three times the area occupied by the animal when standing on four legs.” At the same time, the cage must be maintained, reliably protected from escaping and “not to be excessively rusted”. Feeding large ungulates and predators, as well as birds and reptiles, is permitted only according to a “scientifically based diet”.

Big cats are allowed to be fed on “beef, lamb, chicken as the main feed. In addition, pork and fish can be fed in small quantities.” Animals must have a healthy appearance and normal behavior. Signs of a robust state of predators include smooth, clean fur, no nasal discharge, no abrasions and ulcers on the skin, regular breathing without wheezing, whole teeth without chipping. Behavior embraces the full use of available space with the allocation of its various parts for different purposes, the absence of fear of new objects, the absence of obsessive stereotyping. The contact time with the trainer is strictly regulated by no more than five hours a day.

To be able to continue their work, all circuses, zoos, zoo theaters, dolphinariums and aquariums will have to obtain a license – no later than of January 1, 2022.

Petting zoos are banned, but “contact” shows with animals will remain

The adoption of the law on animals was interpreted by many as a direct ban on petting zoos. Clause 4 of Article 15 refers to the prohibition of activities, “the main purpose of which is to provide spectators or visitors with physical contact with animals.”

Keeping animals in petting zoos, bars and restaurants is completely prohibited by law. Moreover, the very concept of a “petting zoo” is not indicated in the document, but there is a wording about the use of animals, the main purpose of which is “providing spectators or visitors with physical contact” with them.

However, the same law allows the organization of events (shows), “which provide the physical contact of spectators or visitors with animals.” With the condition that these animals will have a shelter in which they can hide from people at any time when they want to. The ban on “feeding predatory animals with other live animals in places open for free visits” is spelled out separately. An exception here can be made only for predators in zoos and circuses.

Given the above, the law can be considered as ambiguous:

The wording of the law basically makes it possible to get around the ban, entrepreneurs can indicate that physical contact with animals is not a primary goal, but a secondary one in their registration documents and get on with their business.