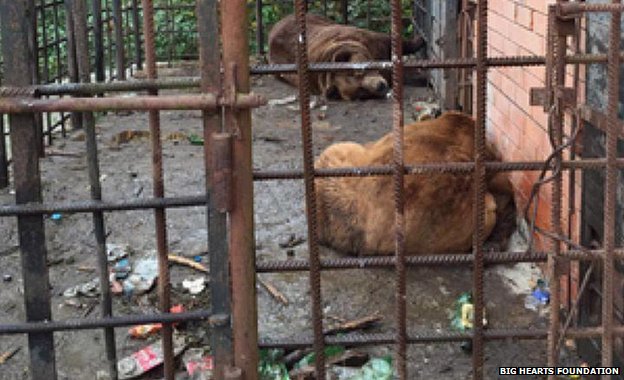 Two alcoholic Russian bears who were kept in appalling conditions for more than 20 years could soon be enjoying a new life in Romania.

In February, a court ruled that the male bears must be confiscated from their owner, who kept them in a small, rubbish-strewn cage at a restaurant in the Black Sea city of Sochi. The animals – one of which is blind – became addicted to alcohol after visitors continually gave them drinks, the Tass news agency reports. While the removal order comes into effect in March, they’re currently still living with the owner, and need travel paperwork to be issued by the Sochi authorities. “The court order is there to take them away but there is nowhere to put them in Sochi,” says Anna Kogan, head of the Big Hearts Foundation, which is coordinating the move with support from other animal charities. A bear sanctuary in Romania has now offered to re-home the bears and provide them with treatment for their alcohol problems.

“It’s a very expensive process to move them abroad,” Ms Kogan tells the BBC, adding that the foundation is still looking for logistical help to transport the bears by boat across the Black Sea. But if they make it to their new home, their chances of recovery are good. “The people there have worked with dancing bears who had similar problems… it can be done,” Ms Kogan says. The restaurant owner previously defended keeping the bears, arguing that beer was good for them because of the climate.